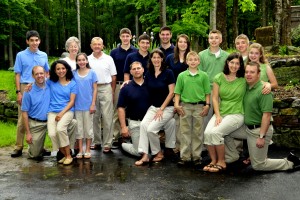 Few privileges are greater than the blessing of growing up in a Christian home where parents sincerely love the Lord Jesus Christ and follow Him as a willing disciple. The testimony of my parents, the experience of God working in our lives, the impact of daily family devotions, and the power of the Word of God won me to the precious Savior at an early age. My mother prayed with me when, as a young child, I asked forgiveness for my sins. In this way, my testimony is similar to that of young Timothy (II Timothy 1:5). The faith was a family heritage that, by God’s grace, I want to see continue on in my children. My grandparents escaped from communist East Germany and fled to the America, desiring to provide freedom of religion and a better life for their children. After enjoying the fruits of their sacrifice, I desire to invest myself in future generations.

Though I never doubted my relationship with God. There was a time in my life during my high school years that I was bothered that I did not have a more “exciting” testimony. I couldn’t even remember the exact date of my salvation. My father wisely shared an analogy with me. Even if I did not know my birthday and my birth certificate had been lost, there is no doubt I was alive. I obviously can’t remember my birth, but it had to happen in order for me to be living (eating, breathing, moving, growing, etc.) Similarly, our security as children of God and assurance of being alive spiritually is all based upon our current spiritual vital signs according to I John 5.

During high school my science class had the privilege of taking a field trip to the Boston Museum of Science. At the time, there was a dinosaur exhibit there. The certainty with which they displayed the evolutionary, old earth speculation that dinosaurs had lived and gone extinct millions of years before man evolved was troubling to me.  We also attended a presentation on the big bang. I remember getting into a discussion with the lecturer during the Q&A afterwards. This experience helped send me on the trajectory towards becoming “Dino Dave.” I became increasingly fascinated with the origins debate, especially as a science major in college, reading everything I could get my hands on from both sides of the controversy.

After college I began speaking on origins at churches, colleges, public schools, etc. I participated in debates on the topic of origins. I found that, while many people were interested in the topic, quite often eyes tended to glaze over when things got technical. But nothing fascinated people and held their attention more than the topic of dinosaurs. Young and old alike are captivated by the great reptiles. I believe this reflects an innate fascination which God implanted, much like the wonder of the vast cosmos (Psalm 19), intending to point us to Him as the creator of these awesome beasts (Job 40:15, 41:10). I became motivated to reclaim the great reptiles for the glory of God. In 1999, still the infancy of the internet, I initiated Genesis Park, a website with the tagline “Dinosaurs: living evidence of a powerful Creator.” As I assembled pages on ancient iconography, historical accounts, paleontological particulars and cryptid research showing that dinosaurs existed recently, I became amazed by the overwhelming volume of evidence for the straightforward teaching that God made men and dinosaurs together (Exodus 20:11). My life’s passion became to share this evidence and point people to the Word of God. If you have not yet come to know the Lord Jesus Christ, both as the powerful Creator of the world and as your personal Savior, I would suggest you review the evidence that the Bible is indeed the Word of God and God’s plan of salvation.